skip to main | skip to sidebar

Welcome to my blog. Here I have tried to capture the adventures of our little family and the trials and tribulations of our never ending garden project(s). Take a look around and leave a comment if you wish. Thanks for stopping by. Jer.

Why did I buy a squirrel baffle again? 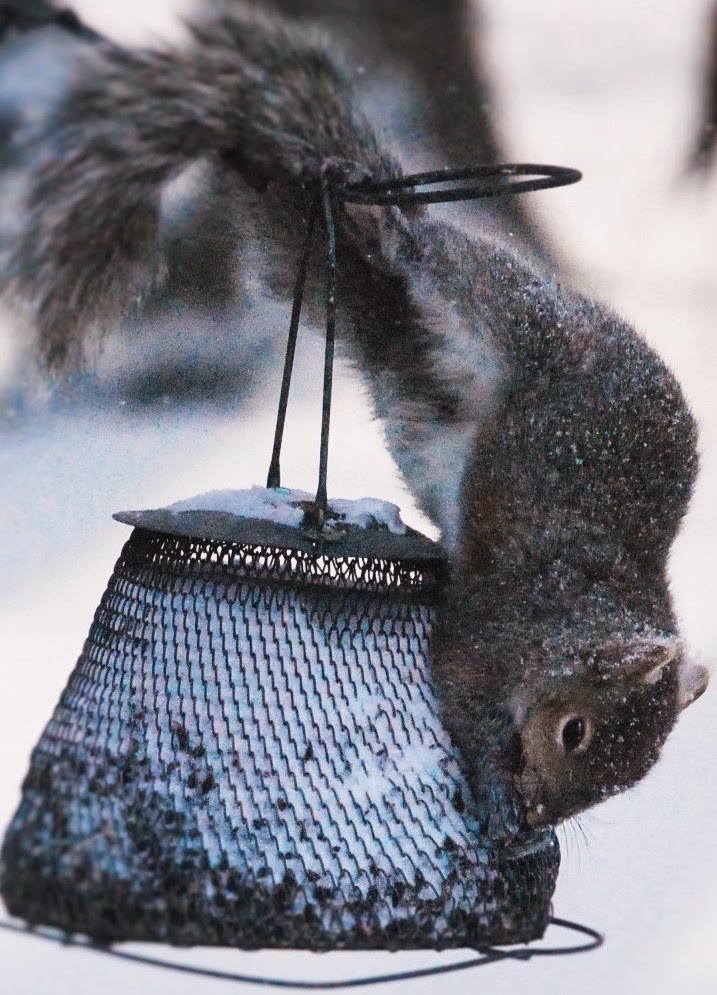 Here we go again.  Another blast from an exceptionally robust Old Man Winter.  I have cleaned the driveway three times this morning already, including a 3 foot gift from the plow.

Starting to see a little more traffic on our road now that the plow has gone through, so things should be back to normal tomorrow.

While it is a lot of work, the snow looks nice in the yard.

Here are some pics taken this morning after my snow blower workout:

Well, it has been a few years since my last post. Since then we have moved to a small town and I have started on a new yard.

The last couple of years have had some challenges. In the fall of 2010 I suffered from a close call of multiple pulmonary emboli; 4 large blood clots passed through my heart into my lungs. I have recovered from that incident, but I will be on anti coagulants for the rest of my life to prevent a recurrence. I continue to battle my Crohn's almost daily, but I am part of a study for a new drug that seems to have some positive results so far.

Last year, our oldest son was diagnosed with Asperger's. His condition has been suspected by us for a couple of years, but due to some school help that only comes with an official diagnosis, we decided to see a doctor to make it official.

However, back to the topic at hand: It struck me that this is an odd time of year to restart my blog, since it is mainly garden focused, but the fall colours are really quite brilliant this year. 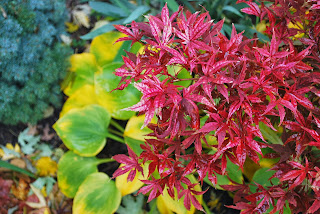 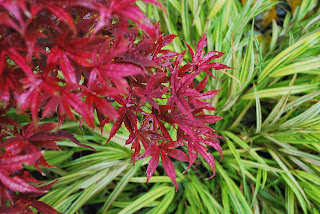 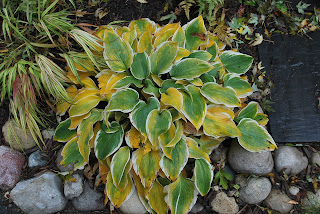 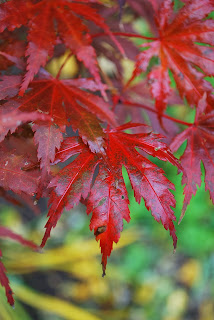 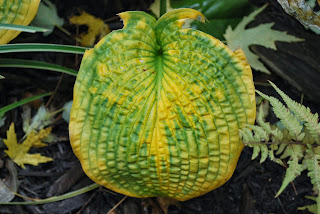 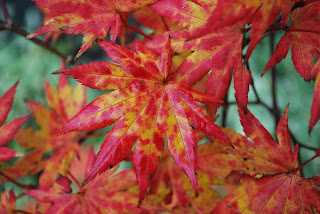 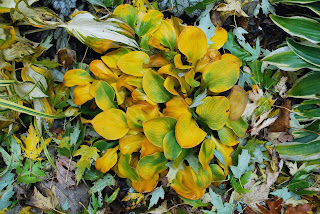 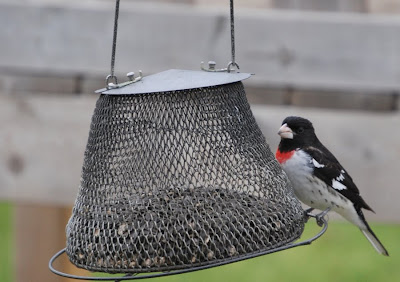 We had a new visitor in the yard today. Have never seen this guy before. He is a Rose Breasted Grosbeak. Apparently they are quite populous here in the summer for breeding, but I guess I just missed them. Anyways, this guy hung around for a few pics.
5 comments: 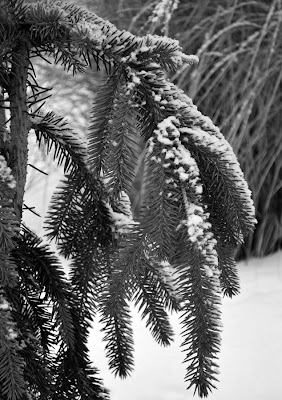 No, not a new hair colour. We had a light fog all day today that seemed to crystalize on the branches and needles all around the garden.
New catalogues from nurseries and growers have the garden juices starting to percolate again so it won't be long now.
1 comment:

Goodbye to the Noughties 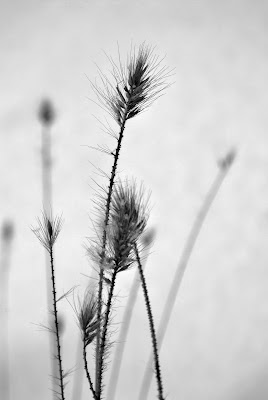 Well another decade is just peeking over the horizon. The Noughties, or O-O's (2000-2009) have been quite eventful to say the least. In 2000 we moved from my hometown Niagara Falls to London. 2003 brought our first child Benjamin and our first house. 2005 brought our daughter Olivia. 2006 put me over the 30 year hump (never to recover). Isaac followed in 2007, also the year that Nina and I celebrated our 10th wedding anniversary. In 2008 we purchased what we plan to be the home that we raise our children in.
I worked at three different places during the decade, Metaldyne, Keiper and Brose (currently).
I have battled my Crohn's throughout, although the last couple of years have been easier than the early 2000's.
Family has changed significantly during the decade; my brother Kyle married Britney in a beautiful wedding and they remain very much in love. However, the same cannot be said for Nina's side of the family; the decade saw the dissolution of three marriages, sadly all with children as casualties. Happily both sets of our parents are still fairly healthy and a major part of our lives.
Good friends have had changes also, with marriage and children coming along. Some have moved further away, some remain close.
Thankfully I have been blessed to travel through the decade with my beautiful wife Nina, growing closer every step along the way.
Bring on the Twenty Tens, or Tweenies, or whatever.
2 comments: 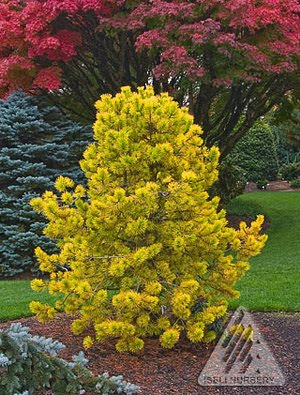 Pinus Contorta 'Chief Joseph'. The holy grail of my conifer want list...turns school bus yellow in winter...the colder the better. Haven't found a source for this one yet north of the 49th parallel. The search continues. 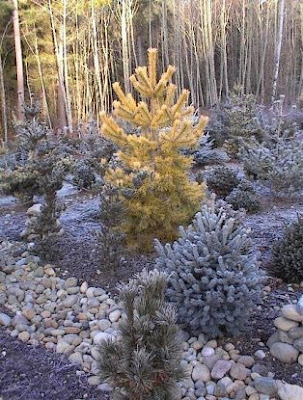 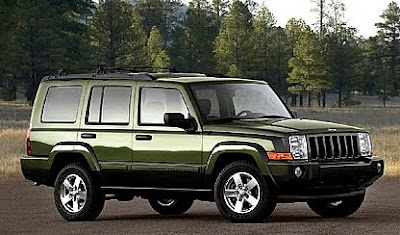 Well here she is, my iron clad mistress...the new Jeep. She kept me from my real family all weekend.

I am the lead Quality Engineer for the our new launch of the 2010 model year seats for this vehicle.

I spent all weekend working to make sure our first shipment to the customer (all 84 seats) were up to snuff. I am pretty exhausted. And all pro bono since 'salary' staff do not receive OT. They are pretty good about getting us a day off instead but it just doesn't make up for the lost time with the family on the weekends as the day off is usually during the week when Nina is at work and the Ben is in school.

Oh well, there could be worse things in the world. Like not having a job.
No comments: